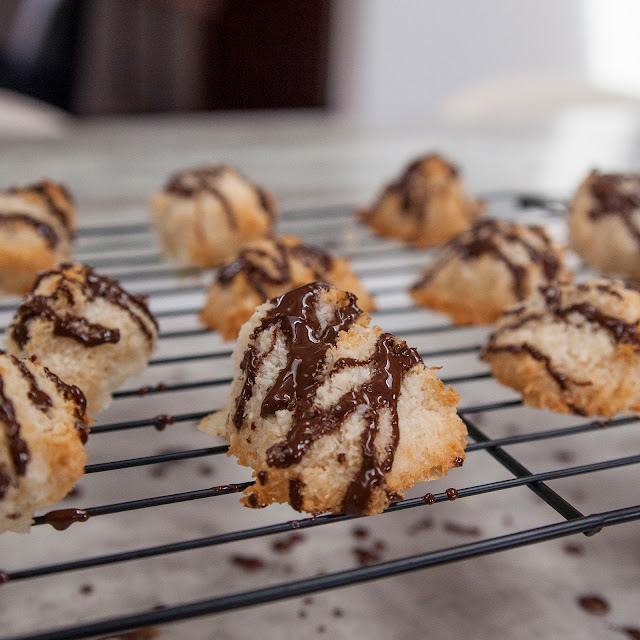 A few years back, I was hired to design a gluten-free menu for a local restaurant here in Sonoma. I'm not gluten-free personally but so many friends of mine are that I got into the habit of just cooking that way. Also, my years of Indian cooking with it's large numbers of naturally gluten-free dishes gave me a lot of experience working with gluten-free flours and ingredients.

Then came aquafaba (aka Bean Water) and a whole world of gluten-free/vegan ideas emerged. The left over water from garbanzo bean cooking created the perfect substitute for egg whites. Who knew? It was the ingredient I'd been looking for. When I was asked to duplicate some of the owner's favorite recipes that her French born mom used to fix in a gluten-free or vegan package, I was all set, and one of the first things she wanted was these coconut macaroons.

These cookies are some of the easiest ones to make, and perfect if you're an aquafaba virgin (c'mon weren't we all once?)

Here's What You Need:

A pinch of salt

Melted dark chocolate for the drizzle

Here's What To Do:

**How to Reduce aquafaba**

In a small pot reduce the water from a drained can of "No Salt Added" garbanzo beans to 1/3 of a cup. Let the bean water cool, until it's ready to use.

Preheat the oven to 325 degrees.

Line a cookie sheet with parchment paper or a silicone mat

Mix together the coconut shreds, sugar, and salt. Set them aside.

Put 4 Tbs of the reduced bean water (aka aquafaba)  in a bowl. Add in the 1/2 tsp of vanilla. Hand whisk the aquafaba and vanilla mixture briskly until it gets foamy, about 30 seconds or so will do.

Pour the aquafaba/vanilla mixture into the bowl of coconut, sugar, and salt. Mix everything around well.

Shape the moist coconut mixture into balls with a tablespoon, melon-baller, or ice cream scoop.

Place the balls of coconut mixture on the parchment or silicone liner on the cookie sheet.

Bake at 325 degrees for about 15 to 20 minutes. Look for the coconut to brown slightly.

Take the macaroons out of the oven and let them cool on the cookie sheet for about 10 minutes.

Move the cooled macaroons to a cooling rack

Melt some chocolate gently in a double boiler and drizzle it over the tops of the macaroons.

When the chocolate has cooled, store the cookies in an airtight container in the fridge, and bring them to room temperature before serving. Or you can do what usually happens around here and just eat them up!

I literally made these when a friend phoned and said she was coming over with her husband and kids...last minute. It's the perfect emergency dessert.

Coming up next, I'll be firing up my Homdoor Tandoor with a recipe from Monasollasa, a cookbook written by Somesvara in AD 1127 for the Royal Kitchens. Now available in your own non-royal back yard. Follow along on Twitter @kathygori