Learn how to make cinnamon rolls with raisins with this easy recipe, topped with cream cheese icing. You will use instant yeast and a stand mixer, shortening the whole process significantly. The bulk of the time for this recipe is the rising time, which is completely hands off, so you can do something else while the dough does its thing!

I love raisin bread and these cinnamon rolls with raisins are my ode to that bread. You will start with an enriched dough to make these, just like the fruit bread and stollen.

If you have a well-stocked pantry (use the pantry checklist as your guide), you likely have all ingredients to make these cinnamon raisin buns! Here's what you need:

There are four major steps to making cinnamon rolls:

To make the enriched dough

All the dry ingredients are combined in the stand mixer, using the paddle attachment. I like to use the paddle first before kneading with the dough hook because I find the paddle does a better job of evenly mixing the ingredients, which is important before proceeding with developing the gluten. Even though I use a stand mixer to knead the dough, I always give the dough a quick knead by hand on a clean surface, in this case, to make sure that the raisins are evenly dispersed in the dough.

Remember that yeast (whether instant, active dry, or fresh) is a living organism. When you buy a packet of yeast at the grocery store, it is dormant. Dissolving it and combining it with sugar and flour (feeding it) brings it back to life.

You need to monitor temperatures, especially if you add warm milk and melted butter. You don't want these ingredients to be too hot because they will kill the yeast. Conversely, if the temperatures of your ingredients are too cold, the yeast will not die, but they will take longer to thrive and to do their job as a leavening agent.

Hint: use a digital thermometer like a Thermapen One to verify the temperature of all your ingredients before combining them with the yeast!

The beauty of working with enriched doughs is that they are easy to roll out without too much struggle. The dough is smooth and a little elastic, but not so much that it bounces back when you try to roll it out.

Once you've rolled out the dough into a large rectangle, you smear the cinnamon sugar filling from edge to edge. If you can't be bothered to cream together the filling ingredients, here's another option: melt the butter and brush it onto the rolled dough, then sprinkle with cinnamon and sugar. All roads lead to cinnamon buns!

Like all cinnamon rolls and rolled doughs (including dark chocolate babka), you roll the rectangle of dough plus filling into a fairly tight, even log. You can cut the log and shape it any way you like, but for this recipe, we divide it into 12 equal-sized buns.

Although with some types of dry yeast, you don't have to proof the dough before baking, I still tend to do it, especially if the kitchen is on the cooler side. The yeast will continue to grow and the dough will aerate and grow even more, leading to fluffy buns in the end.

Bake the buns until golden brown. You can use an instant read, digital thermometer to check the internal temperature of the middle buns to make sure they are baked. It should be at least 88 °C or 190 °F.

Frosting the buns is optional, but what's a cinnamon roll without icing? If you want to skip the icing, may I suggest generously brushing the hot, freshly baked buns with real maple syrup. This will lead to a shiny, sticky finish that will also soften the edges of the buns. Or if you want, you can brush them with maple syrup AND frost them. That would be even better!

There are a few substitutions you can make fairly safely without too many repercussions:

Remember that making baking substitutions is a combination of science and baker's intuition. Any changes may require some additional recipe testing and tweaking.

I usually bake cinnamon rolls in the oven, but I have developed a slow cooker version of cinnamon rolls baked in a Crock-Pot! It works great and for that recipe, you will notice that the rising times are skipped almost entirely and you still get big, fluffy buns!

Bread baking can seem a little daunting at first. Here are the tools I use to make the task a lot easier:

Tip: I highly recommend investing in a clear Cambro container with graduated markings on the side so that you can follow the dough as it rises and see the progress!

Store the cooled cinnamon buns in the pan, wrapped tightly. They last up to 4 days. The edges may dry out a little but the middles will still be soft.

You could also make and shape the rolls and refrigerate overnight before baking them. In that case, I would bring the buns back up to room temperature to proof before baking. 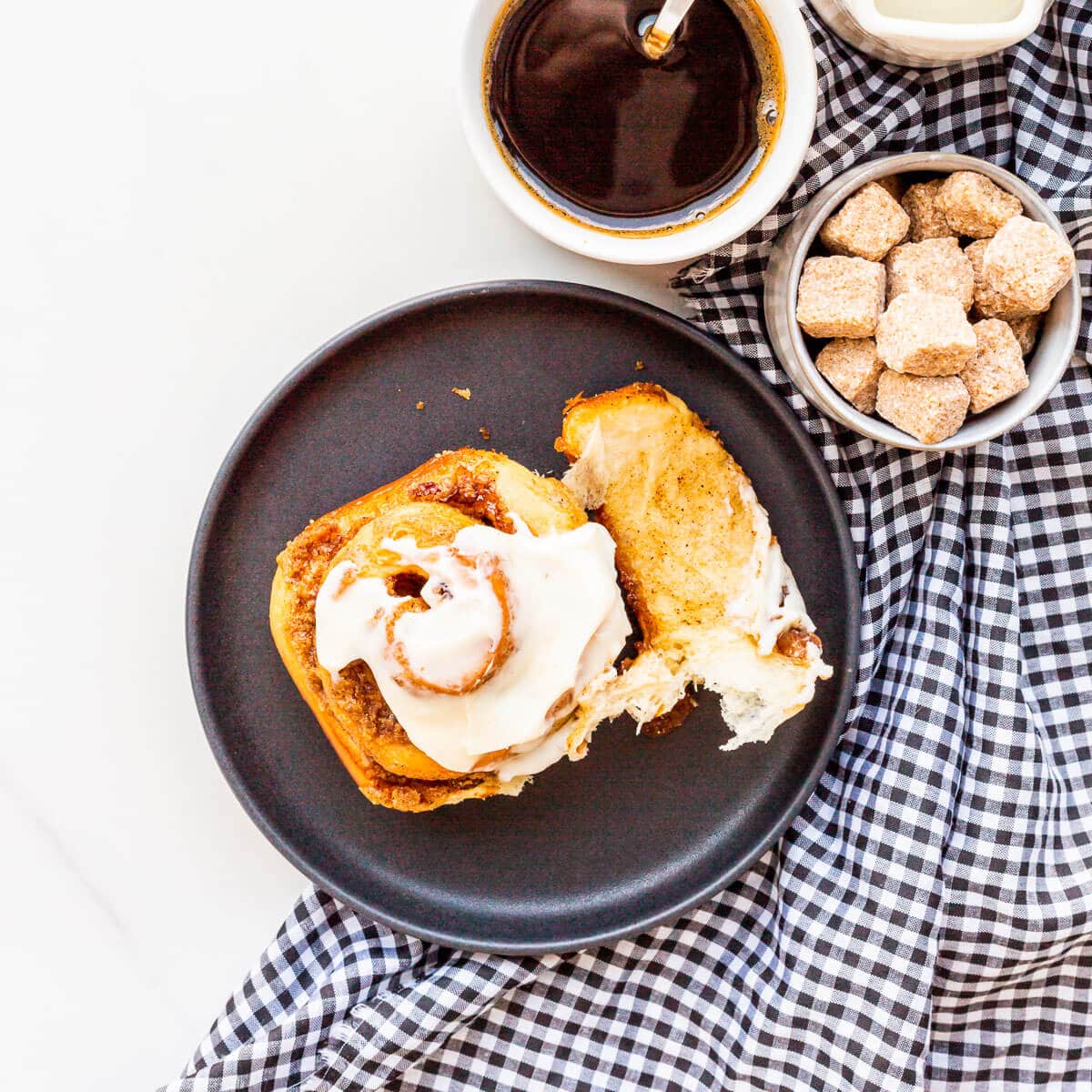 To make the dough

To make the filling

Feel free to double the cream cheese icing if you want more frosting!

The post Cinnamon rolls with raisins appeared first on The Bake School.